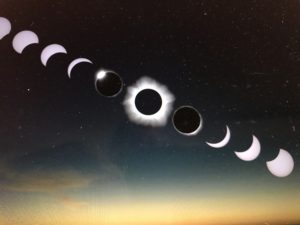 A unique experience is coming to residents of Oregon August 21st, 2017. A total solar eclipse will be visible across a specified swath that falls across Oregon. From  Lincoln City to Newport the umbra will be experienced by residents and visitors from all over. A million plus visitors are expected in Oregon alone to view this awe inspiring two minute blackout.

How does this relate to tennis players? I was watching the Western and Southern 1000 ATP Masters held in Mason, Ohio (close to Cincinnati). The match up of the day was Nadal and Kyrgios. Nadal, seeded number one and due to take over the number one position in the world rankings, was the favorite going into the quarter final match. Both players had played previously in the day. This was their second match, which was testing in itself. Kyrgios had called the trainer on a previous match due to a hip/muscle acting up. It looked to favor Nadal.

Looks can be deceiving. Kyrgios came out playing in the ‘umbra’. He totally eclipsed Nadal to a point where, early in the second set, he played a ball with a trick shot(between the legs) that was insulting to a player of Nadal’s calibre. That is how good Kyrgios was playing. He didn’t take into account the crowd’s adverse reaction to his ‘trick’ shot. In his mind, he was playing in the zone(umbra), was in total control, and having fun. He must have thought the crowd would be understanding of the ‘fun’ he was having. He underestimated the crowd’s reaction of his seeming lack of respect for a player of Nadal’s calibre. The crowd turned against him. It didn’t disturb his awesome level of play for long, and he won the match.

There are many matches a tennis player has where they are in the penumbra of an eclipse. In a penumbra there is a percentage involved. For example you can be in the 96 percentile of the eclipse, which means you experience only 96 percent of the total eclipse. It could also be 50 percent, or 25 percent.

Applying that same percentage to your ability playing in a tennis match, you could be playing at a high level with small gaps of unforced errors. You could also be at a 50 percent level where half your shots are well thought out and half are not, or at 25 percent, which would not be a winning percentage.

Outside of the Umbra and Penumbra

This is definitely not the place to be in when you want to win. There are days when, no matter how hard you try, you cannot find the right combination to win. Thing just don’t go right for you.

While none of us wants to be in that position, there is an up side to those days. Based on 55 years of playing and coaching experience, when approached with the right attitude, those outside the penumbra days, can provide a positive outcome. If a player works harder on those days at raising the level of their game; maybe a day, maybe two days, maybe a week later, they take a jump up in their level of play. It is as if they forced their way to a higher level by working harder when faced with adversity.

With the advent of the solar eclipse to be seen August 21, 2017, in parts of the US, new terminology can be used by tennis players to categorize their level of play. While all of us would like to play in the umbra, you will be fortunate to have that happen twice a year. For those of us who play outside the penumbra of the eclipse that, too, will fortunately happen approximately twice a year. For the rest of the time we all have to play in varying percentages of the penumbra. Welcome to the human race. Has that been your experience?

I retired from a career as a tennis professional to move to Portland with my wife to care for my in-laws and my mother in Abbotsford, BC. Not wanting to retire I took a vocational test and at the top was 'writer'. I have been researching and writing for about five years now and am looking to take more steps forward in pursuing this as a career. Time will tell whether I have the 'passion' to stay the course. My wife and I have three grown children with whom we are close. I had the privilege of coaching a high school team to a state championship in 2010. The team won by 1/2 point which was a credit to all team players. Looking to attend another writer's conference this year and grow. In the meantime I look forward to improving my social networking skills in order to have more meaningful contact with others who share a passion for life.
View all posts by wdkealy →
This entry was posted in Passion in Life, Your Virtual Tennis Coach. Bookmark the permalink.