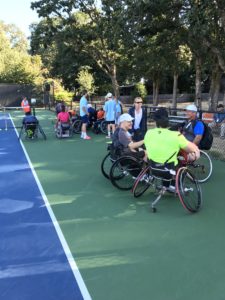 The aspect of wheelchair tennis at the PNW Sectional Tournament, held at the Salem Swim and Tennis Club, you don’t see, is how the players travel.

These wheelchair players are not just local. They come from all over. Of course local players from Keizer, Sandy, West Linn, Redmond, Portland, Bend, and Salem, are represented. Then there are players from Washington, Colorado, New Mexico, California, Kansas, Idaho, Utah, and Florida. There are international players from British Columbia, Canada (go Canada); Chile, Chile; Mexico City, Alamos.

I get lost in thought, sometimes, just imagining what these players go through to travel to tournaments: transportation to the airport, go through customs(if out of country), get to their seat on the plane, what about getting to the bathroom on the plane (if needed), deplane, go to baggage claim, be picked up at the airport and get a ride to their lodgings. All this accommodating their two wheelchairs and luggage. Remarkable.

Lets get to the on court part, where the participants are playing tennis. What is the difference between regular tennis and wheelchair rules. Well, for one thing, the ball, when in play, can either be taken out of the air, or played on one or two bounces. Once it bounces three times it is out of play. The other main rule has to do with the service motion. The player, from a stationary position,  can make one (or none) slight roll of their wheelchair before they serve the ball. With the addition of a few other rules regarding propelling and ‘keeping you butt’ in the chair, the rules of ITF or USTA apply.

While the players are competing for rankings in the division they are playing in, it is awesome to observe the players interacting with each other off the court – many times waiting to play – other times having lost – just socializing. There are groups of two or three on the side of the walkway, between the two sets of courts. There are others, on the end looking down the courts. They are conversing and enjoying each others company. Very different from the tennis we observe in the professional ranks or USTA Junior, Senior, or League play where the players come and go without taking time to socialize.

I had not officiated at a Wheelchair Tournament for a couple of years. It was nice to be invited back. I remembered many of the players and met the newer players such as Casey Ratzaff , a 19 year old from Wichita,Kansas – Wichita, Kansas. I did a double take when I heard where Casey was from. How could anyone from Wichita, Kansas learn wheelchair tennis? In researching Casey, I learned he did indeed have a great teacher and inspiration to learn tennis. He is fast becoming an inspiration to those who learn of his background and to those he meets, me included.

My time officiating at the wheelchair tournament went by too fast. Each player has a story of how they ended up in a wheelchair. If only those of us who have a tendency to complain could spend a little time with these players, our own ‘grousing’ would end and we would walk away, inspired by those whose desire and courage put mine to shame.

I retired from a career as a tennis professional to move to Portland with my wife to care for my in-laws and my mother in Abbotsford, BC. Not wanting to retire I took a vocational test and at the top was 'writer'. I have been researching and writing for about five years now and am looking to take more steps forward in pursuing this as a career. Time will tell whether I have the 'passion' to stay the course. My wife and I have three grown children with whom we are close. I had the privilege of coaching a high school team to a state championship in 2010. The team won by 1/2 point which was a credit to all team players. Looking to attend another writer's conference this year and grow. In the meantime I look forward to improving my social networking skills in order to have more meaningful contact with others who share a passion for life.
View all posts by wdkealy →
This entry was posted in Passion in Life, Your Virtual Tennis Coach. Bookmark the permalink.